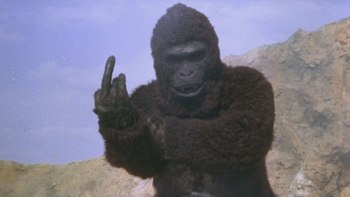 The film's Signature Scene
Not to be be confused with King Kong!
— Tagline of the English release
Advertisement:

The movie's plot is pretty simple. A 36-foot-tall gorilla being transported by an oil tanker from some faraway island breaks free and makes it's way towards the nearest landmass (South Korea). The creature proceeds to march its way across the countryside, attacking people and destroying settlements that get in its way. And while the United States military forces posted in South Korea refuse to accept the locals' reports of a big gorilla, actress Marilyn Baker (played by Joanna Kerns) has come to the country to film her next big movie. Of course, having a giant ape and a beautiful blonde in the same movie has the results you expect, so naturally, the two plots collide and the combined armed forces of America and South Korea must rescue Marilyn from the clutches of the oversized primate before South Korea gets totally trashed.

Compare to The Mighty Peking Man (another low-budget 70s King Kong clone from Asia; in this case, Hong Kong), and Queen Kong (a British Gender Flipped parody of King Kong also released to cash on the 70s remake's success). Also see Yongary: Monster from the Deep, another South Korean ripoff of a classic giant monster movie (Godzilla in this case).