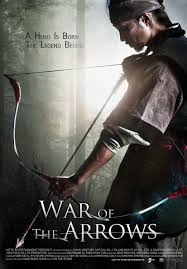 Arrow: The Ultimate Weapon is a 2011 South Korean historical war epic by Kim Han-Min. Also known as War of the Arrows, the film takes place during the Second Manchu Invasion of Korea, in the 1630s. Nam-Yi and Ja-In are brother and sister in Korea, adopted by the ruler of a northern locality in Korea after their father is killed for treason (likely being loyal to the previous regime).
Advertisement:

Fast-forward several years, where both siblings have grown up. Both have trained as skilled archers, with Nam-Yi a true master of the martial art. His trademark skill is the ability to curve the path of the arrow around obstacles to hit targets at seemingly impossible angles. During Ja-In's wedding to the local ruler's son Seo-Goon, Manchurians invade the village, slaughtering many of the villagers (including Nam-Yi's and Ja-In's adoptive parents) and taking the rest as prisoners of war (including Ja-In and her new husband). Nam-Yi wages a one-man guerrilla war against the invaders, seeking to retrieve his sister and bring her back home to Korea.