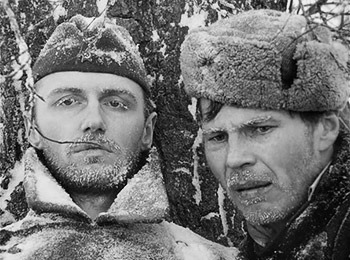 The Ascent (Восхождение, Voskhozhdeniye) is a 1977 film made in the Soviet Union, directed by Larisa Shepitko.

Sotnikov and Rybak are two soldiers with a Red Army partisan unit in Belarus in 1942 during World War II. The partisan unit, which includes women and children, is hiding in the woods, and has run out of food. Sotnikov and Rybak are sent off in search of something to eat. They go to a farm that Sotnikov knows, only to find that it has been burned to the ground and abandoned. Next they find the house of the local village head man, who is a collaborator in cahoots with the Germans. They deprive him of a goat, but on the way back they run into some Germans, and Sotnikov is shot in the leg. The two men take refuge in the home of Demchikha, a young woman with three small children, but tragedy strikes when they are caught by a German patrol.

One of only four feature films made by Shepitko before her death in a car wreck in 1979 at the age of 41.