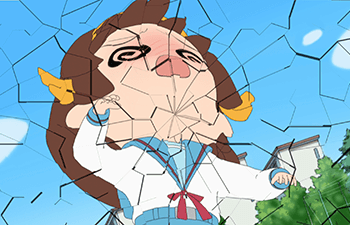 Again?! Okay, that's the last straw— Haruhi, I'm billing you for the camera repairs from now on.
Advertisement:

No, we're not talking about waterboarding cameras, torturing or beating them, or otherwise inflicting abuse to innocent young cameras. This is something a little bit different.

How does one show that the on-screen action is getting out of control? By having it hit the camera! The entire screen will shake, or be obscured by gunk or debris. If the impact is really bad, it will crack the lens or even break the camera, treating the audience to a screenful of static.

Normally, when a camera shakes during filming, it's considered a mistake, and it's edited out or the scene is reshot. After all, the shake ruins Willing Suspension of Disbelief by drawing attention to the camera — "why the hell is there a camera in the setting?" An actual crack in the camera lens would also guarantee a new shot, since the crack would be in every shot and the lens would ultimately need to be replaced. All the same, some filmmakers and showrunners will use camera shaking or other abuse intentionally, sometimes Played for Laughs. The phenomenon has proliferated to the point where it's being used in computer-generated Special Effects shots, animation, and video games — Camera Abuse without the camera.

Of course, Camera Abuse can be justified when it's explicitly presented as the view from an In-Universe Camera — such as an Insecurity Camera, a character's handheld camera, or even just someone's first-person point of view. Not surprisingly, there's quite a bit of overlap with Deadline News.

Camera Abuse is a common form of Breaking the Fourth Wall.note In this case, it would be a Literal Metaphor. Usually done to add comedy or tension to an action scene.

As a use of the medium as something more than the medium, this is a subtrope of Painting the Medium. Compare Body Wipe, where someone often walks into the camera, Jitter Cam, False Camera Effects, Lens Flare, Screen Shake, Screen Tap, Ominous Visual Glitch, Snowy Screen of Death, Fight Woosh. In a 3-D film, this may be combined with a Paddleball Shot. Frequently overlaps with Interface Screw when used in video games. Not to be confused with Camera Screw. Contrast Shoot the Television, where a screen is broken by someone viewing it instead of inside it.

(You can stop shaking your monitor now. No, really. You're going to break it or something.)

Examples with their own sub-page: