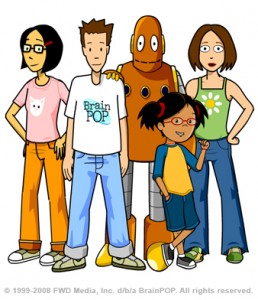 cast.note From L to R: Rita, Tim, Moby, Annie, and Cassie. Not pictured, Ben from BrainPOP ELL and Nat.

Could you describe BrainPOP here?

is an educational website that uses numerous web cartoon series to teach children (Grade school through high school) different concepts ranging from the Pythagorean theorem to Martin Luther King to The Beatles to the urinary system.

The most prominent, and likewise popular, of these series is the "Mysteries of Life" cartoons, which follow Tim and Moby as they answer fan-mail, explaining a different educational concept with each one. Tim is a teenage boy and the main character of the series. Moby is his orange robot.

Other recurring characters are Cassie and Rita, two of Tim's friends who appear in many "Mysteries of Life" videos, along with having a series of their own. There is also Bob, a lab rat who appears in several shorts.

There is a BrainPOP Jr. section, which is for younger children, and features many expies of the main site's characters. Instead of Tim, the main character of the series is a young girl named Annie. Instead of answering letters of a topic, she asks questions about the topic, and, obviously, she answers them herself! Oh, and Moby appears there too with a slightly different personality. Moby's alternate continuities can probably be chalked up to Rule of Funny.

Oh, yeah. And it costs money (the videos, at least; the minigames introduced in 2011 are free for everyone).