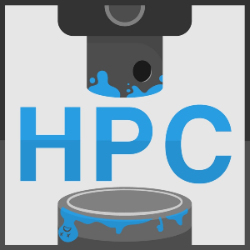 is a channel about crushing things with a 100-ton hydraulic press, following in a long tradition of very simple YouTube channels about destroying things. It is based in Tampere, Finland, and is hosted by Lauri Vuohensilta and his wife Anni. Lauri works in a machining shop owned by his family (Vuohensilta Engineering Works

), and the press is just one of many pieces of equipment in the shop.

HPC skyrocketed to prominence in October 2015 when the video aptly titled "Can you fold paper more than 7 times with hydraulic press" made it to the front page of Reddit and quickly went viral. The channel gained over a million subscribers in the span of two months, has attracted media attention from around the world, and gotten a number of sponsorships. As several articles have pointed out, what sets HPC apart from other channels about destruction and the hordes of hydraulic press imitation channels that followed in its wake is Lauri and Anni themselves. Lauri has a very thick Finnish accent and gives ridiculously deadpan, Captain Obvious commentary of the events, while Anni cackles at her husband and the destruction.

They also started a secondary channel, called Beyond the Press

, where they post videos about whatever isn't about crushing things with their press- vloggy-type videos about their lives, destroying stuff using other machines around the shop, various outings, preparation work for pressing videos, and footage of real work done as part of the shop's business.

They have also contributed (Mostly Lauri's voice commentary) to the creation of a pair of Mobile Phone Games: Hydraulic Press Pocket

. Many of the following tropes can be found there as well.

Welcome to Hoodraulik Press Channel. Today we will be crushing these trope-es. Aaaaand here we go!:

"And for today's extra content, we have this stinger. It looks extremely dangerous and may attack at any time, so we must deal with it."
*SPLAT*