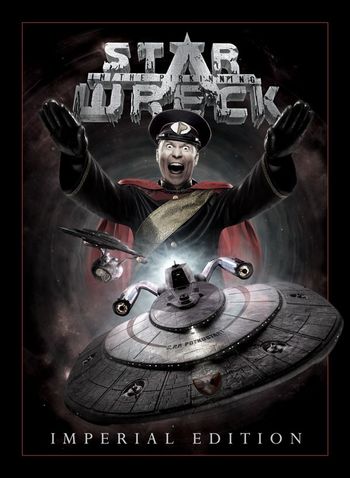 "Space, the primal frontier. These are the voyages of the starship Kickstart. Its five-month mission: to seek out Lebensraum for humanity and to destroy all enemies. To boldly blow up enemies where sane men fear to tread."
— Opening Narration of Star Wreck II: The Old Shit
Advertisement:

Once upon a time, there was a Finnish guy called Samuli Torssonen. He was a huge fan of Star Trek and a computer geek. One day in 1992 he decided to combine those two things and created a short CGI film called Star Wreck. Eventually he made more with the help of his friend Rudi Airisto, who in turn couldn't stand Star Trek and made sure to mock the hell out of it in the scripts. Star Wreck turned into a parody series of Star Trek featuring James B. Pirk, a gigantic douche in control of a spaceship called C.P.P. Kickstart, and his crew Mr. Spökö (Spook) and Mr. Fukov.

Many years later, Torssonen and his friends upped the ante and started to make a feature length live action Star Wreck film. The project kept escalating until Star Wreck: In The Pirkinning was finally released over Internet after 7 years of production. Thanks to completely professional-looking graphics, fairly good performances from amateur actors and combining the universes of Star Trek and Babylon 5 in one big parody space brawl, the film became a huge phenomenon, eventually seeing a DVD release, a revised version called Imperial Edition, a Tabletop RPG and much more. And everybody involved in the filmmaking lived Happily Ever After.

Star Wreck has 8 films in total:

The films can be viewed for free from various sources on the Internet, and the official site is here

. Torssonen and co. have since moved on and produced Iron Sky, a film about Nazis on the moon.

Not to be confused with the Alvin and the Chipmunks Go To The Movies episode of the same name. Or the novel series by Leah Rewolinski.