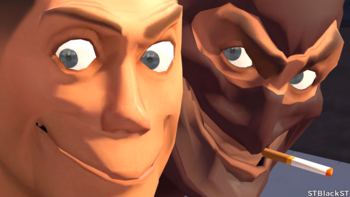 Today, we're gonna make some sex.
What the fuck?!
—Many characters
Advertisement:

is a YouTube animator best known for making machinima videos featuring characters from Team Fortress 2. Black's videos are prominently made in Garry's Mod, but with their visual quality and special effects, they could be easily mistaken for something made with Source Filmmaker. While Black's videos commonly utilize a Random Events Plot with plenty of humor, his recent videos follow a loose narrative called Unusual Troubles.