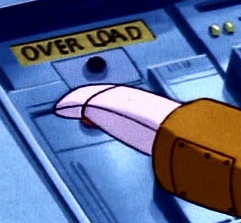 No way that button could ever come back to bite them.
"Why do we even HAVE that lever?"
— Yzma on a lever that leads into a crocodile pit, The Emperor's New Groove
Advertisement:

When the Mad Scientist or Gadgeteer Genius creates a machine of diabolical nature, some function gets thrown into the mix that wasn't quite planned, doesn't really serve any practical purpose, and may even be an Achilles' Heel—a lever for flooding the cockpit of the Humongous Mecha with its fuel reserves, for instance.

A variant has additions made which do serve a practical use... just not ones which make logical sense for the machine to have. A jetpack that makes martinis and plays the complete works of Marvin Gaye, for instance.

Compare Oven Logic, where the oven dial goes up to thousands of degrees. One has to wonder why the oven had a dial that could go up that high if it wasn't meant to be used that way.

Compare with Cow Tools, where nothing about the device makes sense. Contrast with Mundane Utility, where simply being what it is lets the device do something useful — cooking popcorn with your Death Ray, for instance. Frequently overlaps with Self-Destruct Mechanism. See also Caps Lock, Num Lock, Missiles Lock.

The name, for the record, is a play on conventional wisdom, in reference to the fact that any inventor holding the Sanity Ball would never install such things to begin with.

While trying to fight back against some Goons in WayneTech, Harley picks up a gun that turns out to be a Cancer Ray.

Alternative Title(s): I Question The Wisdom Of This Device

While trying to fight back against some Goons in WayneTech, Harley picks up a gun that turns out to be a Cancer Ray.