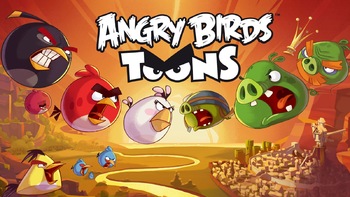 Angry Birds Toons is an animated series of shorts based on the Angry Birds video game series, it follows the everyday lives of the titular birds and their enemies, the Bad Piggies. It's considered something like The Anime of the Game. It's the first official Adaptation Expansion of the game series, with the second being the movie of the game that was released on 2016. Toons uses Saturday Morning Cartoon style and every chapter doesn't last 3 minutes (the average time is 2:30 aprox.)

The series also had a couple of Spin-Off series that use a totally different kind of animation; Piggy Tales, focuses on the minion pigs and was done in Stop Motion/Claymation, and Angry Birds Stella, which uses CGI graphics, stars the Girly Girl pink bird of the same name and is an adaptation of the spin-off game of the same name.

The series premiered on March 17, 2013 and ended on May 13, 2016, with a total of 3 seasons and 104 episodes. It could be viewed in some of Rovio's apps as well as on ToonsTV. After ToonsTV was shut down in 2017, Rovio started uploading episodes from this series as well as Stella onto their YouTube channel

. Since 2016, Netflix starts to compile this series into 14-minute chapters, that have 3 episodes of Toons, one of Stella and 2 of Piggy Tales.

Shares a character sheet with the rest of the franchise. The recap page can be found here.

Attempting to put out a fire

Attempting to put out a fire