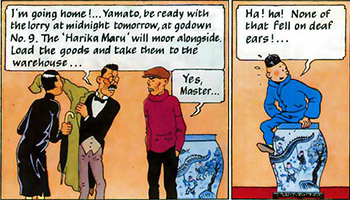 "In books and vids, those being eavesdropped upon always thoughtfully explain what they are talking about for the edification of the eavesdropper. The eavesdroppee says, 'Of course, as you all know, the cab to which I refer is Sherlock Holmes's hansom cab which had been accidentally driven off a bridge during a heavy fog while following the Hound of the Baskervilles, and which I found it necessary to steal for the following reasons.'"
— Connie Willis, To Say Nothing of the Dog
Advertisement:

If a character in almost any type of fiction gets a chance to eavesdrop, they will almost certainly hear something important. So, for instance, if our hero finds himself hiding in the villain's base listening to a conversation, chances are it's going to be about the villain's latest plans for world domination, rather than two random Mooks talking about their weekend plans. It's also very likely that the villain will take this opportunity to go over important information everyone they're talking to should already know, in order to give the hero all the context and backstory he needs. In this way, this trope can function as a sort of in-story version of As You Know, only instead of filling in backstory for the audience, it's being done for the character, and is a way to get vital, plot-moving information from one group or person to another.

In less serious circumstances, it can also be a way for a one character to learn what someone else thinks of them. So whenever Alice is unseen but can hear Bob talking, chances are Bob will say something important about Alice.

There will also be occasions where Carol, whom Bob is talking to about Alice, knows full well that Alice is listening and will often be asked to talk to Bob specifically for this sort of information. Or, of course, that Bob knows (or guesses, or hopes) it and tailors his talk to Alice in a way that Carol won't realize it. (Many Exact Words evasions of The Promise to never tell feign this on a Surrogate Soliloquy.)

This applies even if the talking character would not normally be coherent. Characters who talk in their sleep in the grip of Past Experience Nightmares often give remarkable clues to the trauma causing the dream. Babbling under the influence of drugs can also produce this.

In Real Life, there are law enforcement stakeouts and electronic bugging. However, stakeouts usually require officers to take hours-long shifts over the course of a week — or longer, and electronic survelliance has the eavesdropper dealing with a signal-to-noise ratio.

Since this trope is Older Than Steam, subversions appear frequently. Two of the most common are: first, to have a character think they've overheard one thing, when in fact they missed an important detail that changes the situation entirely. This can lead to Innocent Innuendo and/or Out-of-Context Eavesdropping situations. The second subversion is to have a character who is aware of this trope annoyed when it completely fails to happen. Despite this, it's still played straight often enough to be an Undead Horse Trope.

The trope mostly exists because Realistic Diction Is Unrealistic, and because The Law of Conservation of Detail cuts off any eavesdropped conversation that is not relevant or necessary.

See also: Contrived Coincidence, and Conveniently Coherent Thoughts for a mind-reading variation. Contrast The Omniscient Council of Vagueness. Characters who are likely to benefit from this trope include the Snooping Little Kid and Amateur Sleuth. If the eavesdropper gets caught, the question is How Much Did You Hear? Occurs frequently when you use Curtain Camouflage. Easily-Overheard Conversation is a given for this trope. Staging the Eavesdrop is when someone tries to intentionally invoke this trope on others in other to achieve some kind of goal. Contrast Out-of-Context Eavesdropping.

After tricking Tina into trading away her old doll, Bronconius brags out loud about his actions while passing by Louise who overhears what he said and then tells her family about this.

After tricking Tina into trading away her old doll, Bronconius brags out loud about his actions while passing by Louise who overhears what he said and then tells her family about this.