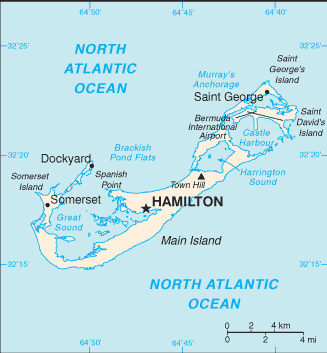 A British Overseas Territory in North America located east of The United States in the middle of the North Atlantic Ocean, Bermuda is self-governing, with its own constitution and its own government, which enacts local laws, while the United Kingdom retains responsibility for defence and foreign relations. While the territory is not part of The Caribbean geographically, it is still considered to be culturally Caribbean, with the territory being an associate member of CARICOM, the majority of its population being black at 54% with whites being the second largest part of the population at 31%, and having noticeable African and West Indian influences in its culture. Bermuda had one of the world's highest GDP per capita for most of the 20th century and several years beyond until the global recession, and its two largest economic sectors are based on offshore insurance and reinsurance and tourism.
Advertisement:

Bermuda was discovered in 1505 by Spanish explorer Juan de Bermúdez. It is mentioned in Legatio Babylonica, published in 1511 by historian Pedro Mártir de Anglería, and was also included on Spanish charts of that year. Both Spanish and Portuguese ships used the islands as a replenishment spot to take on fresh meat and water. Legends arose of spirits and devils, now thought to have stemmed from the calls of raucous birds (most likely the Bermuda petrel, or cahow) and the loud noise heard at night from wild hogs. Combined with the frequent storm-wracked conditions and the dangerous reefs, the archipelago became known as the Isle of Devils, and neither Spain nor Portugal attempted to settle it.

In 1609, Sir George Somers and Sir Thomas Gates, with several hundred settlers, food and supplies, left from England with a flotilla of seven ships to relieve the colony of Jamestown, Virginia. On their journey, the Flotilla was broken up by a storm, and as the flagship, the Sea Venture, was taking on water, Somers drove it onto Bermuda's reef and gained the shores safely with smaller boats – all 150 passengers and a dog survived. They stayed 10 months, starting a new settlement and building two small ships to sail to Jamestown. The group of islands were then claimed for the English Crown, and the charter of the Virginia Company was later extended to include them. In 1612, the English began intentional settlement of Bermuda with the arrival of the ship Plough, and St. George's was settled that year and designated as Bermuda's first capital, being the oldest continually inhabited English town in the New World. In 1615, the colony was passed to a new company, the Somers Isles Company, named after Sir George Somers. The names of many places in Virginian refer to the archipelago, such as Bermuda City and Bermuda Hundred, and the first English coins to circulate in North America were also struck in Bermuda. The creation of the earliest conservation laws of the New World were also made here due to the archipelago's limited land area and resources, with acts being passed in 1616 and 1620 to ban the hunting of certain birds and young tortoises.

A civil war started in the territory in 1649 due to similar tensions to those in England, which was also in the middle of the English Civil War. The majority of colonists developed a strong sense of devotion to the Crown, while dissenters, such as Puritans and Independents, were pushed to settle The Bahamas under William Sayle. Bermuda and Virginia, as well as Antigua and Barbados were, however, the subjects of an Act of the Rump Parliament which was essentially a declaration of war, prohibiting Trade with Antigua, Barbados, Bermuda and Virginia. The Royalist colonies were also threatened with invasion, and the Government of Bermuda eventually reached an agreement with the Parliamentarians in England which left the status quo in Bermuda.

In the 17th century, the Somers Isles Company suppressed shipbuilding, as it needed Bermudians to farm tobacco in order for it to generate income from the land. Bermudians began to turn to maritime trades relatively early in the 17th century, but the Somers Isles Company used all its authority to suppress turning away from agriculture. This interference led to the islanders demanding, and receiving, the revocation of the Company's charter in 1684, and the Company was dissolved. The Bermudians rapidly abandoned agriculture for shipbuilding, replanting farmland with the native juniper trees that grew thickly over the entire island. Establishing effective control over the Turks Islands, Bermudians deforested their landscape to begin the salt trade, and became the world's largest salt trader and remained the cornerstone of Bermuda's economy for the next century. Bermudan sailors and merchants also pursued whaling, privateering and merchant trade, and the Bermuda sloop became highly regarded for its speed and maneuverability, soon being adapted for service with the Royal Navy.

In 1811, the Royal Navy started building the large dockyard on Ireland Island, in the west of the chain, to serve as its principal naval base guarding the western Atlantic Ocean shipping lanes. To guard it, the British Army built up a large Bermuda Garrison, and heavily fortified the archipelago. The Royal Naval Dockyard, and the attendant military garrison, continued to be important to Bermuda's economy until the mid-20th century, and today, the National Museum of Bermuda, which incorporates Bermuda's Maritime Museum, occupies the Keep of the Royal Naval Dockyard, including the Commissioner's House, and exhibits artifacts of the base's military history. In addition to considerable building work, the armed forces needed to source food and other materials from local vendors, and since the beginning of World War II, US military installations were also located in Bermuda.

In the early 20th century, as modern transport and communication systems developed, Bermuda became a popular destination for seafaring American, Canadian and British tourists. As the United States 1930 Smoot–Hawley Tariff Act cut off Bermuda's once-thriving agricultural export trade to the US via protective tariffs, development of tourism in the territory was encouraged even more as a replacement. In 1948, regularly scheduled commercial airline service by land-based aeroplanes began to Kindley Field (now L.F. Wade International Airport), which helped tourism in the territory reach its peak in the 1960s–1970s, and by the end of the 1970s, international business had replaced tourism as the dominant sector of Bermuda's economy. 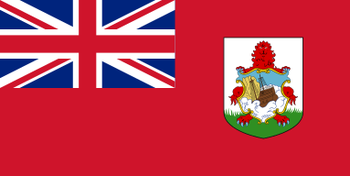