The S is not silent.
"Plus Ultra!"
— National Motto * Means "further beyond", an Ironic Echo of the legendary warning carved on the Pillars of Hercules at the mouth of the Mediterranean: Nec Plus Ultra - "nothing further beyond".
Advertisement:

Spain (Spanish: España), officially known as the Kingdom of Spain (Spanish: Reino de España), is a Southern European country inhabited by more than 40 million people, home of the Conquistadores and the first language of over 400 million people, and, including the Canary Islands, is the southernmost country in Europe. The modern day Spanish trace their descent from many peoples, including but not limited to Celts, Romans, Greeks, Phoenicians, Visigoths, Suebians, Jews, and Muslims, and the modern nation-state was formed with the union of the Kingdom of Castille and the Kingdom of Aragon in 1469 by the marriage of their respective monarchs, Queen Isabella and King Fernando and the siege of Granada in 1492, which would complete the Reconquista and end 700 years of Muslim rule in the Iberian Peninsula. Through the discovery and later conquest of the Western Hemisphere that same year, an empire grew and soon became the one of the most powerful on the planet until its eventual decline over the course of the 1800's, culminating in a war with the United States at the very end of the century.note Although Spain still managed to keep some colonies in Africa until the 1970's. This, along with the failure of the conquest of Morocco and the feuds between political factions led to the last and bloodiest of five Civil Wars. The winner of the war ruled the country for no less than 36 years until his deathnote and, yes, he is still dead, when the current Constitutional Monarchy formerly led by Juan Carlos I and now King Felipe VI was installed. Spain thus became one of the few examples in the modern day in which a monarchy is restored after being overthrown for quite some time, the other being Cambodia (although to be fair, the Spanish monarchy never actually renounced their rights for their country when the Republicans took over in 1931).

Spain is bordered by France and the tiny Andorra in the north-east and Portugal in the west. It is bathed by the Mediterranean Sea at its east, the North Atlantic Ocean at the west and north and the Straits of Gibraltar at the south, where the Mediterranean joins the Atlantic. There is also the matter of the little British colony known as Gibraltar.

Spain's Government consists of a Prime Minister (Presidente del Gobierno or president of the government) elected democratically by Parliament upon nomination by the King, who is the Head of the Cabinet (Consejo de Ministros or council of ministers). He resides in the Moncloa Palace, Madrid. 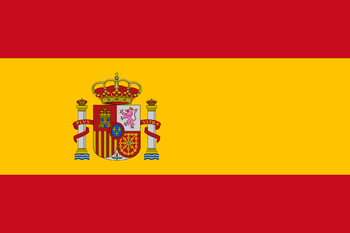 Red and yellow are traditional colors of Spain dating back to the Reconquista, with the yellow stripe being twice as large as the two red stripes; near the hoist side is the coat of arms.
Coat of arms of Spain 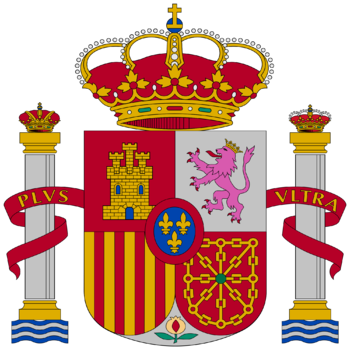 The coat of arms is dominated by a crowned shield containing (from upper left clockwise) the arms of Castile (gold castle on red field), León (purple lion on silver field), Navarre (array of golden chains on red field), Granada (a pomegranate fruit on a white field) and Aragon (nine alternating yellow and red stripes), as well as that of the Anjou branch of the House of Bourbon, Spain's royal family (blue field containing five fleur-de-lis with a red border), added by King Philip V (himself French-born and titled Duke of Anjou) in 1700; on either side of the shield are a pair of columns standing on watery bases, symbolizing the Pillars of Hercules

, a pair of promontories guarding the Strait of Gibraltar, surrounded by ribbons which read "Plus Ultra" ("Further Beyond" in Latin) and topped by the crowns of the Holy Roman Empire and the Spanish Kingdom, the former alluding to Emperor Charles V, also titled King Charles I of Spain, under whose reign Spain expanded its territories to South America and the Philippines.
Spanish national anthem
As Spain is one of the only three countries that do not have lyrics for its national anthem, click on this link to hear what the anthem sounds like