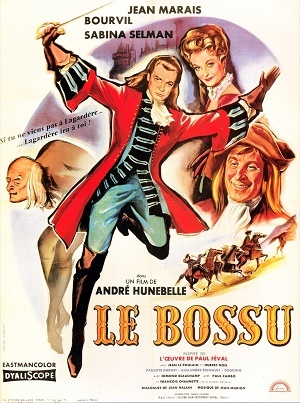 "If you don't come to Lagardère, Lagardère will come to you!"
Advertisement:

Le Bossu (The Hunchback) is a French swashbuckler film directed by André Hunebelle, released in 1959. It is based on Paul Féval's eponymous novel and stars Jean Marais, François Chaumette, Bourvil and Sabine Sesselmann (credited as "Sabina Selman").

In the year 1701, Duke Philippe de Nevers (Hubert Noël) is an influential French nobleman at the court of King Louis XIV, and one of the richest in the kingdom. He has secretely married the beautiful Isabelle de Caylus (Sabine Sesselmann) and has a baby daughter with her, named Aurore. His cousin Philippe de Gonzague (François Chaumette), while feigning to like him, actually plots to assassinate him and his daughter in order to inherit his wealth and possessions and take Isabelle for himself.

The first murder attempt by Gonzague's men is thwarted by the Duke with some help from the chevaliernote knight, as a nobility title Henri de Lagardère (Jean Marais), who has been warned by a defector from Gonzague's men, Passepoil (Bourvil). To thank Lagardère, Nevers teaches him "la Botte de Nevers", his secret fencing trick to impale someone on the forehead, and they leave Paris for the castle of Caylus. Despite fending off a new wave of henchmen sent to kill him with Lagardère's help, Nevers ends up impaled in the back with a masked Gonzague's sword. Lagardère slashes Gonzague's hand to recognize him when the time of vengeance will come. He also vows to protect and raise Aurore, avenge Nevers and make sure Aurore gets her family's inheritance, not matter how much time it will take.

Two other notable theatrical film versions of the novel were made, one in 1944 starring Pierre Blanchar and one in 1997, On Guard, starring Daniel Auteuil. Television saw a two-part miniseries in 2003, titled Lagardère and starring Bruno Wolkowitch.

Not to be confused with The Hunchback of Notre Dame nor any of its adaptations.