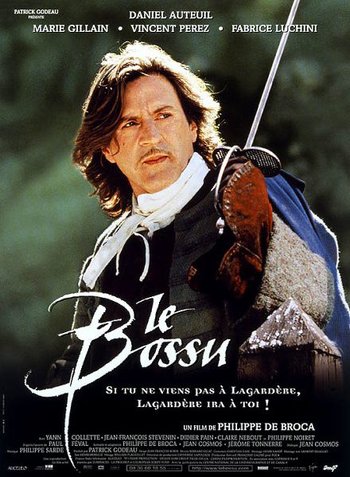 "If you don't come to Lagardère, Lagardère will come to you!"
Advertisement:

In France in the year 1700, a skilled and eager swordsman named Lagardère (Daniel Auteuil) challenges Duke Philippe de Nevers (Vincent Perez) to a friendly duel in order to learn his secret lethal trick known as the "Botte de Nevers". Nevers agrees and quickly wins. Nevers then learns that he has a child by Blanche de Caylus, a fact previously concealed by his cousin and would-be heir, the wicked Count of Gonzague (Fabrice Luchini), who's deeply jealous of him and has an unrequited love for Blanche.

That night Nevers escapes an assassination attempt by Gonzague's men, who paid a naive Lagardère to join them. Lagardère refuses to kill Nevers, and the latter spares his life, hiring him as trusted companion on the road to Caylus for his marriage instead, teaching him his lethal trick along the way. Gonzague has all the Caylus wedding's guests slaughtered and stabs Nevers in the back, leaving Nevers' baby girl Aurore orphan and heir to his wealth, and it's up to Lagardère to raise and protect her and avenge Nevers.

Two other notable theatrical film versions of the novel were made, one in 1944 starring Pierre Blanchar and one in 1959, Le Bossu, starring Jean Marais. Television saw a two-part miniseries in 2003, titled Lagardère and starring Bruno Wolkowitch.

On Guard provides examples of: