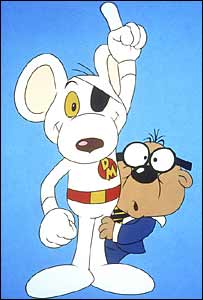 [in front of the Dark Forest, a sign reads "Enter at Your Own Risk"]
Cedric: Oh, no! I'M not going in there! Can't you read the sign?
Graham: Come on, Cedric. There might be something important in here.
Cedric: Go if you want to. I'll wait HERE!
— King's Quest V: Absence Makes the Heart Go Yonder!
Advertisement:

A Sidekick with a peculiar twist: presumably to serve as a Foil to a brave (or cocky) hero, they're so yellow that one has to wonder how the heck they ended up in the adventure business in the first place. The Cowardly Sidekick is often what happens when the Plucky Comic Relief isn't so... well, plucky. Anything but, in fact. This may cross over with Cowardly Lion and OOC Is Serious Business if something (like the hero being in trouble) causes them to confront danger...possibly trembling in terror the entire way or suffering a delayed nervous breakdown afterwards.

Often overlaps with Bumbling Sidekick. Compare The Drag-Along, for which this usually wasn't his choice to begin with. Contrast Reckless Sidekick.