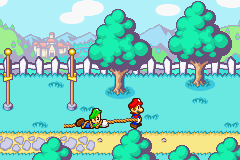 Not always this literal.
"I'd love it if this place were boring. But they're always dragging me off to some cockamamie adventure! 'Hurry Iago, we have to find the razor-clawed ice giant!', or 'Come on Iago, the natives of Nincompoop need saving from a blood beast with a taste for parrots!' And then, when we do stay home, some mutant vegetable shows up, and they want me to be the bait!"
— Iago, Aladdin: The Series
Advertisement:

Most of the hero team is eager and ready to go on another adventure, face peril, and explore new regions. But not this guy. This guy would rather stay home, where it's safe. Maybe he doesn't really think the trip is worth it, maybe he doesn't care, or maybe he just has an aversion to painful, dangerous situations. Yet the team wants him to come, so, kicking and screaming if necessary, he comes along anyway.

None too happy about constantly being dragged along on adventures, you can usually find this one complaining and making sarcastic remarks, but, when push comes to shove, you can bet that he'll show his heroic traits in the clutch.

Contrast the Sour Supporter, who doesn't believe it will work but will contribute anyway (although with sardonic comments), and The Load or The Millstone, who may or may not be supportive but whose actions and/or very existence work against the heroes' purposes.

A variation on The Complainer Is Always Wrong and I Do Not Like Green Eggs and Ham. Most Drag-Alongs are also Butt Monkeys or Chew Toys, which may justify their reluctance. In the event the group gets into trouble, he'll be the victim of the Guilt by Association Gag no matter how loudly or how many times he protests he Didn't Want an Adventure.

Compare Refusal of the Call, Cowardly Sidekick, Cowardly Lion, I Just Want to Be Normal, Dragged by the Collar.

Contrast The Team Wannabe but do not confuse with the Tagalong Kid. Also not to be confused with Dragged into Drag, though some unlucky Drag-Alongs may have this happen to them.

Throughout the episode, Kagami has to be dragged reluctantly by Marinette, to the point where the latter ends up grabbing her ankle to prevent her from leaving the pool.

Throughout the episode, Kagami has to be dragged reluctantly by Marinette, to the point where the latter ends up grabbing her ankle to prevent her from leaving the pool.