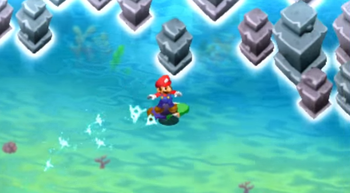 You Shall Not Pass! ...past the map's edge.
Let's say you are playing a video game. You approach the shore, ready to explore the vast ocean with absolute freedom of movement... until your path is blocked by an inexplicably impenetrable line of rocky reefs.
Advertisement:

These are the Boundareefs of the map, where the designers decided to swap the Invisible Wall for this more elegant if geographically implausible frontier.

In Real Life, you'll very rarely (if ever) see such conspicuously perfect lines of rocks leaving no single opening for going further, but these are just so convenient. After all, the options to create a very clear frontier in the open ocean are quite limited — there is little Chokepoint Geography that can be adapted to the marine environment.

Sometimes, Boundareefs can be used to delimit clear corridors instead of creating an artifical boundary to the map.

It is noteworthy that this trope can cause some Fridge Logic issues that Invisible Walls do not: namely if there is mention of sailing ships or old shipwrecks within the enclosed space, especially when it is mentioned that they come from far away. How on Earth could they get past the reefs?

See also Insurmountable Waist-Height Fence for another improbable obstacle in video games. Compare Border Patrol, where the reefs are replaced by monsters attacking the player if they go too far.