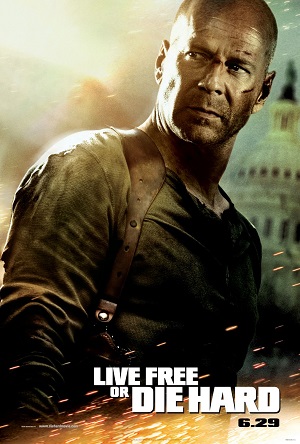 Live Free or Die Hard (known as Die Hard 4.0 outside of the U.S.) is the fourth movie in the popular Die Hard franchise. It was released in theaters in the U.S. on June 29, 2007.

In this installment, John McClane (Bruce Willis) is teamed up with a computer hacker named Matt Farrell (Justin Long), to stop a group of cyberterrorists led by Thomas Gabriel (Timothy Olyphant). Gabriel's group are trying to execute a massive organized strike to disrupt society by dismantling technical infrastructure in the United States. McClane's daughter Lucy returns as a Damsel in Distress.

The searchlights go out due to a power outage, leaving the structure as a dark silhouette.

The searchlights go out due to a power outage, leaving the structure as a dark silhouette.