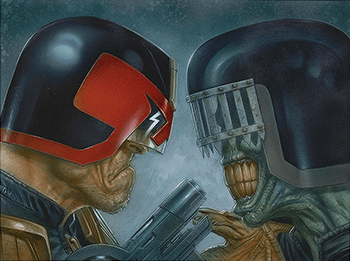 The ultimate lawman meets the ultimate hangman.
"Our methods have not differed as much as you pretend. I am but a shadowy reflection of you. It would take only a nudge to make you like me. To push you out of the light."
— Rene Belloq, Raiders of the Lost Ark
Advertisement:

A character who has similarities to a good or not as evil character, but is evil(er). They may look like that character and have/had abilities and obstacles similar to them. Sometimes, but not always, a Big Bad. Classically, an Embodiment of Vice pitched against a correlating Embodiment of Virtue.

Frequently, the Evil Counterpart is the character equivalent of For Want of a Nail: they are a Fallen Hero that represents what our hero might have become had their Backstory been slightly different — or what they could still become should they succumb to The Dark Side. They also save creators the trouble of thinking up new abilities to give their villains, especially for comic book heroes and video games (where new abilities have to be implemented). Because The Hero and the Evil Counterpart are such great foils for each other, the counterpart has an excellent chance of being the hero's Arch-Enemy or a Classic Villain, although this is not always the case. If the hero is an Anti-Hero, a Mr. Vice Guy, a Good Is Not Nice type or a Jerk with a Heart of Gold, the Evil Counterpart would have the same negative traits but none of their redeeming qualities. This character is virtually always a Mirror Character to the protagonist.

Often leads to a "Not So Different" Remark.

If the first character to be introduced is the evil one, the good one would be his Good Counterpart.

Scanty and Kneesocks Daemon are two demon commanders who are shown to be eloquent, prim, and bear a strict adherence to order and authority; which is in stark contrast to the Anarchy sisters being raunchy, hedonistic, and rebellious Fallen Angels.

Scanty and Kneesocks Daemon are two demon commanders who are shown to be eloquent, prim, and bear a strict adherence to order and authority; which is in stark contrast to the Anarchy sisters being raunchy, hedonistic, and rebellious Fallen Angels.