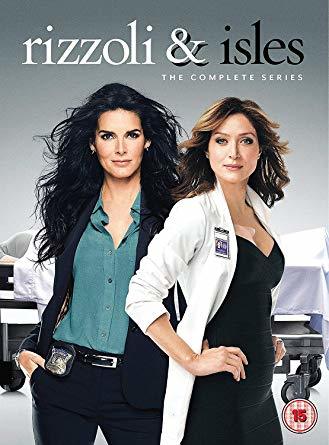 The classic Buddy Cop Show formula usually involves two law-enforcement officers with very different methods pairing up to fight crime. Older versions usually involve a By-the-Book Cop working with a Cowboy Cop. They will form an Odd Couple due to their views of regulation.

In recent years, new shows have partnered Cops and Scientists. Rather than squabbling over regulations, their Odd Couple differences come from their roles in each investigation, which brings out differences in personality. This may have something to do with the success of the CSI franchise, which highlighted the scientific side of law enforcement.

The Cop will deal with the elements of police work that involve dealing with other people such as interrogations, arrests, and dealing with superiors. If a fight breaks out, it will be the Cop who does the heavy lifting. The Cop will usually be Book Dumb but Street Smart.

The Scientist will usually be more of an ivory-tower intellectual with little practical experience in law enforcement. They will usually have personality quirks or No Social Skills (except when they're one-on-one with the cop). They might also be a Straw Vulcan. They will handle the CSI-style parts of the investigation and rarely do anything physical. If they interact with witnesses, suspects, or superiors, they'll either keep quiet or end up making things worse. Usually, Hilarity Ensues.

Despite their differences, both halves of the team come to respect each other and become an effective crime-fighting force. Big bonus whenever either of them pulls off an act corresponding to the partner's expertise, at a critical point. note The Scientist does not need to become a Badass Bookworm; becoming a Cowardly Lion, where they overcome a persistent issue to get the Cop out of danger, is usually their big Moment of Awesome. The Cop does not need to be a Genius Bruiser; being Strong and Skilled enough to uncover and act on the key clue that even the Scientist didn't catch is usually their own big moment.

It's important to remember that, to count as this trope, the Cop and the Scientist must have roughly equal focus. They must be partners. While many crime-themed shows have both cops and scientists, they might focus more on one or the other. If so, then that show does not count as this trope.

Could be a form of Brains and Brawn. Compare Androids and Detectives.