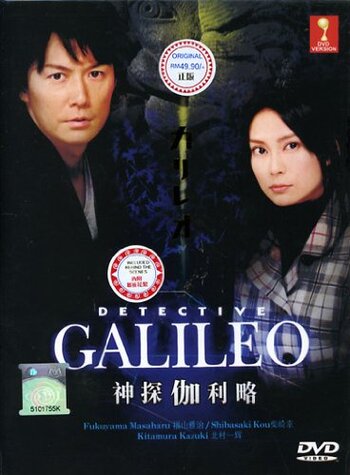 Rookie detective Kaoru Utsumi (Kou Shibasaki) encounters a mysterious case of apparent spontaneous human combustion on her first assignment. Seeing her dedication, her about-to-be-transferred sempai Kusanagi suggests she meet with a friend of his, an associate professor at Teito University and the actual solver of the many strange cases he'd encountered: Manabu Yukawa (Masaharu Fukuyama), a genius but odd physicist, once nicknamed "Galileo the weirdo". The two don't really get along at first, but develop respect for each other as they go on to solve many seemingly inexplicable or supernatural cases.

Galileo is a Japanese Detective Drama based on the Detective Galileo book series by Keigo Higashino. Debuting in October of 2007, the series ran for two seasons, plus two TV specials and two movies. For the second season, the now experienced Kaoru is replaced by Misa Kishitani (Yuriko Yoshitaka) as a new rookie detective.

This and her strong sense of justice are Kaoru's best points. Despite being inexperienced and somewhat naïve, she is determined to see a case through for the sake of the victims, even if she has to investigate by herself from scratch.