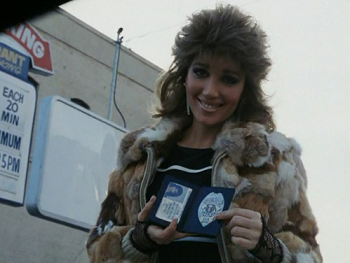 "I know what you're thinking. Did she serve up six bottles or only five as part of her lap dances? Well, to tell you the truth, in all this excitement I kind of lost track myself. But being as this is a 1944 Magnum, the most expensive wine in the joint, and will blow my bikini clean off if we have it in stock, you've got to ask yourself a question: Do I feel lucky? Well, do ya, hunk?"note "Hey...I gots to know."
Advertisement:

The baseline Dirty Harriet scenario is when a female law enforcement officer goes undercover in a role only a woman is expected to take, like stripper or prostitute. This allows for the natural tensions of undercover work, and of course also provides a reason for her to wear little clothing. Building on this, there are a number of other possible variations on the trope. The woman might not be proper law enforcement (perhaps she's a private detective, for instance), or the role might not be immediately connected to sex work (though still require her to wear sexy clothes). Or, it might actually be a male officer who is Disguised in Drag for similar purposes: perhaps the job is simply deemed too dangerous for a woman. In the latter case, unless it's played for laughs, it's likely that the guy looks good enough in drag to pass convincingly as a woman, at least at first glance. Or possibly, he is deliberately impersonating another Crossdresser, or a Transgender woman.

Note that while this does happen in reality, it's very controversial, and legally and morally delicate. It has a very high chance of going spectacularly wrong and can easily turn into the sort of situation where a would-be arrestee is suing the city or the state or the feds for entrapment or worse. The real-life prostitution stings shown on various cop documentaries usually entail the undercover officer doing just the absolute minimum to make it absolutely clear that the client is really buying sex, and once money has changed hands excuse herself while her colleagues (who have been monitoring the situation from the next room or a parked car) storm in and make the arrest.

The term has also been used to describe female police officers depicted in film, TV, and literature as being just as deadly as their male counterparts (or, specifically, Clint Eastwood's Dirty Harry character)note A mid-1980s TV series titled Lady Blue, about a deadly female cop, was in fact promoted by the network as being a "Dirty Harriet" series. But that is not what this trope is about.

See Stripper/Cop Confusion for a humorous inversion of the trope.