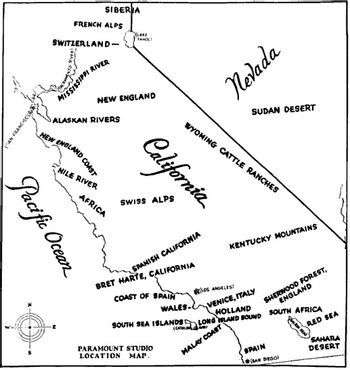 No matter where you go, there you are.
"They really should change the name of Toronto to Fake New York For Use In Movies Only."
— James "Kibo" Parry
Advertisement:

Any exotic foreign locale in a TV series or film is, due to budget or danger to the cast, likely to actually be somewhere in California, such as Kirk's Rock. For British sci-fi shows, it's "Quarry Doubling" — any desolate alien planet is usually a quarry (usually the BBC Quarry) within a couple of hours' drive from London — or Doubling for London.

One of the most famous examples of this is in Star Trek (and all subsequent series), in which every planet they land on looks exactly like the deserts of southern California, the redwood forests of Northern California, or the mountains of Central California (assuming it isn't a studio cyclorama instead). Oh, and from time to time the script might call for a beach. Any ideas?

This is actually one of the main reasons why Hollywood and the Los Angeles area became the capital of American filmmaking.note The primary reason was Thomas Edison's Motion Picture Patents Company required filmmakers to pay exorbitant licensing fees to make films. Most did not want to pay, so they set up shop in the Los Angeles area, and if Edison's patent enforcement thugs found them, the Mexican Border was only a hundred miles away. The varied locales within two or three hours drive (deserts, beaches, mountains, farmland, ranches), along with the consistent year-round good weather, made Southern California ideal for making movies.

California is not the only place that has done this. The Canadian province of British Columbia, between the metropolis of Vancouver and its vast mountain forests and oceans nearby, has become the third-largest film production center in North America thanks partly to tax incentives, and its ability to stand in for the Pacific Northwest (usually Seattle or Portland) or any small, rural town in the northern half of the US. You could describe the city as "one giant backlot, a bunch of anonymous buildings that can stand in for anywhere else."

Another Canadian city, Toronto, has doubled for cities such as New York City and Chicago more times than it has actually represented itself. Yet another Canadian city, Montreal, has usually played Francophone cities like Paris as well as American cities like Boston, St. Louis, and (again) New York City. Utah has been Vulcan, Mars, and most famously the Old West. Georgia and Louisiana have represented not just the Old South, but also modern Midwestern suburbia, northern industrial cities, and the jungles of Africa and South America. North Carolina also is known for this trope - the larger cities like Charlotte and Raleigh have portrayed Midwestern and East Coast cities while Wilmington and the Cape Fear region has stood in for almost everything under the sun. Australia is also a place that does this - Brisbane and Sydney have played various American cities, the grassier rural areas of New South Wales and Queensland have doubled for the English countryside, and the Aussie outback is often used as a stunt double for locales such as the Middle East, various alien planets, and the desert parts of California. In addition, New Zealand has been used as a stand-in for, among other places, Japan and New York State. South Africa's varied natural and cultural landscape and multi-racial population has allowed cities such as Johannesburg and Cape Town to double for small and big U.S. cities and various European cities, and other locales there to play everything from the American Deep South to alien planets.

In Europe, filmmakers of the '70s and '80s working on a low budget loved to film in Spain or Italy. This was a major factor in the rise of the Spaghetti Western genre, as the deserts of Spain and the easy availability of Spanish-speaking actors made filming your Mexican-set westerns easy. In the 2000s and '10s, Eastern Europe became popular with action and horror film producers working on a budget, with liberalising governments offering nice tax incentives for foreign film productions and plenty of actors who can play vaguely-Russian sounding bad guys.

State and national governments know this, and the combination of advertising and economic boon for production (employ local crews, hire local caterers, increased traffic to local sites, etc) make them frequently offer generous tax credits to lure film and television productions to their locales, to the point where even California itself has started offering its own tax incentives

The main reason is that a production crew is much more than a cameraman, director, and actors. There are usually at least two or three dozen people working on prepping a location, providing the appropriate light, and transporting the equipment to film a scene. Moving everyone, especially on a weekly television budget, is sometimes implausible even if the location is willing to permit filming. Other times, the actual location is not an option for security, political, and/or cultural reasons. Even in the most general sense, many cities are averse to blocking off the entire downtown for weeks on end or offering unlimited access to important landmarks, and so some sequences are filmed piecemeal, getting a couple vintage shots of actors near scenic imagery and then finding a more practical location to film the rest.

Another time that this may be necessary is if the original location (and this is true especially for period pieces) no longer looks like what it did in story. While obviously it might be a bit difficult filming an ancient Rome in Rome itself, as the city resembles Caesar's city in name only, even the London of today is quite different from the London of Victorian times through the early part of the twentieth century (thanks in no small part to the Luftwaffe). This makes some doubling in another city more valuable simply because that location actually looks more period-accurate note Görlitz, a city of less than 100,000 at the easternmost border of Saxony with Poland, has stood in for numerous other cities, because it was left nearly unscathed by the war and has seen few urban planners trying to rebuild the whole thing according to their vision since. Even more famously, Prague in the modern day Czech Republic was the stand-in for pre-war Paris. Unlike the actual capital of France, Prague still had its medieval and renaissance era buildings (in varying states of disrepair) and it was cheaper too. It was additionally one of the few ways to (legally) get behind the Iron Curtain for smugglers, spies, and defectors, though the extent to which Hollywood-affiliated people took advantage of this is grossly exaggerated by both fiction and the documents produced by the House Un-American Activities Commission at the time. It probably was done, but nowhere near as widely as people thought. Conversely, filming in a story set 20 Minutes in the Future will have its own problems because to make a location seem futuristic would require a lot of construction and visual effects anyway.

Of course, this can lead to Television Geography, as well as Misplaced Wildlife, Misplaced Vegetation, and It's Always Spring. In many cases, the average viewer may not be familiar with the location in question, but it can end up bugging those viewers who have been or actually live in those locations. Also take into account that any production wants to Shoot the Money, and may choose a more scenic place to film instead of the less impressive place it actually is.

This can have a very odd effect the first time one visits southern California. Upon seeing for the first time those scrub-covered hills and twisty roads, one gets a truly unearthly sense of deja vu. "Have I been here before?" you ask yourself. Then you realize that you have... on TV! For those who live in southern California, it is amusing to point out places one recognizes from TV shows. The most used location is Griffith Park, whose scrabble mountains can be seen in nearly every 1950s "jungle" movie and M*A*S*H.

This can lead to The Mountains of Illinois. Can also lead to hilarity when the setting location becomes famous for an unrelated reason, and suddenly pictures of the actual place are all over the news.

The easiest way to avoid California Doubling is to simply have the setting actually be California (usually Los Angeles or Burbank, both of which are near Hollywood and where a good chunk of the television industry is actually located). Indeed, many television shows, especially sitcoms, do exactly that. And even a show that isn't normally set in California can have its characters go there for an episode or two; see Filming Location Cameo. This is also the reason why so many TV shows are set in New York City, because most of the TV studios that aren't in California are located there.

Contrast with Canada Does Not Exist, where the shooting location actually affects the storyline.

Films — Live-Action
Take note that in the 1980s quite a few movies shot in South Africa omitted to mention they were shot there in the credits for obvious reasons.
Live-Action TV

Bronson Cave Through The Years

In his Monster Madness highlight of the movie Robot Monster, James talks about the titular Cave, which appears in the feature, and highlights some of the many films and serials that have been filmed around the area.

Example of:
Bronson Canyon and Caves

Bronson Cave Through The Years

In his Monster Madness highlight of the movie Robot Monster, James talks about the titular Cave, which appears in the feature, and highlights some of the many films and serials that have been filmed around the area.