All spoilers for the previous films are unmarked 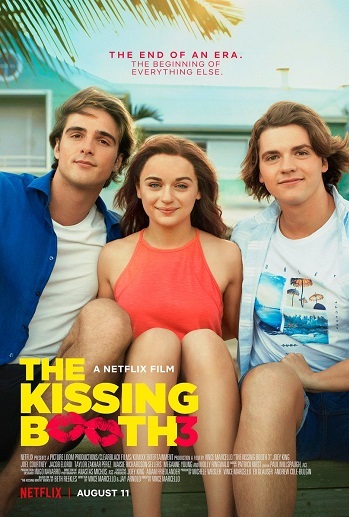 A 2021 teen romantic dramedy film, The Kissing Booth 3 is the third installment in the The Kissing Booth series, based on the book series of the same name by Beth Reekles. It was made available on Netflix on August 11, 2021. It adapts the basic plot of The Beach House, a novella released between the two books, but mostly tells an original story. Once again, it was directed by Vince Marcello, with the screenplay written by Marcello and Jay Arnold.
Advertisement:

Taking place shortly after The Kissing Booth 2, Elle (Joey King) is planning to spend the last summer before college alongside her best friend, Lee (Joel Courtney), her boyfriend, Noah (Jacob Elordi), and Lee's girlfriend, Rachel (Meganne Young), at the Flynn family's beach house. Elle has chosen to attend Harvard so she can be with Noah, but feels guilty of abandoning Lee. To make up with him, she invites him to do a bucket list of activities they dreamed as kids, all in the span of a single summer. She soon learns how exhaustive it can be to balance her role as a friend to Lee and a girlfriend to Noah, something that isn't helped when she reunites with Marco (Taylor Zakhar Perez). To top it off, she struggles to accept the fact that her father (Stephen Jennings) is dating another woman, Linda (Bianca Amato). Can Elle juggle the responsibilities and face new realities, or will she break down and lose everything she has?

The Kissing Booth 3 contains examples of: