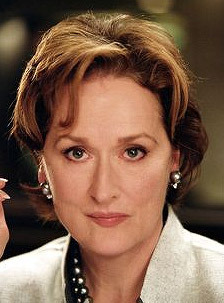 Hair that doesn't scream "I want to speak to the manager", but a softspoken (yet confident) "I am the manager".

Women in politics and business have to be meticulous with their appearance, lest they look weak, inexperienced, or unprofessional. This means that one of the most common and effective hairstyles a woman politician can have is Power Hair.

It consists of a short cut reaching the jawline, parted in front and coiffed expertly with mousse or hair net and swept towards the edge of the jaw, so you'll never see it cross in front of the face like many a lovestruck Damsel Scrappy does incessantly. Power Hair is patterned somewhat on the hairstyle commonly used by flappers in the twenties. Another common variation is cutting it short all over but leaving it longer near the top and "sweeping" it upwards.

Power Hair is so pervasive it's worked its way even into Disney cartoons.

Similar to its Sister Trope Boyish Short Hair, the reason why this cut is deemed professional is because it actively averts Long Hair Is Feminine, since femininity is often associated with incompetence and unreliability, both in general and in relation to masculinity. However, whereas Boyish Short Hair intentionally mimics short hairstyles that men sport, Power Hair still seeks to maintain its femininity in its styling, as being a woman that's perceived as too masculine has its own slew of issues.

This trope is an example of Truth in Television. Numerous, numerous female politicians will have Power Hair or a variation thereof. It's a brave woman who wears a different hairstyle, and a political juggernaut if she does so and remains successful. Possibly justified in that shorter hair is becoming a fad with older women in the West since it's easier to care for, and few politicians get to the top in their youth. (All this also applies in business and certain professions.)

See also Iron Lady and High-Powered Career Woman, who are likely to sport this hairstyle, and Lady in a Power Suit, the perfect accessory for the hair. Oppose Power Makes Your Hair Grow. Related to Real Women Don't Wear Dresses.