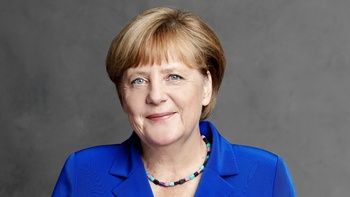 Mein Chancellorette.
"Wir schaffen das!"note Literally "We can do this!", said in response to criticisms that Germany would not be able to house the amounts of migrants that were coming into the country during the Syrian Migrant Crisis.
Advertisement:

Angela Dorothea Merkel (née Kasner, born 17 July 1954 in Hamburg) is a politician who served as the Chancellor of the Federal Republic of Germany from 2005 to 2021. She's the first woman and first person from the former East Germany to have the job.note Though she was born in Hamburg and moved to the GDR aged only a few weeks when her father became a pastor in Quitzow in Brandenburg. At 16 years and 16 days, she is also the third-longest-running Chancellor of Germany in the 130+ years of the office, surpassed only by her mentor Helmut Kohl (who beat her by just 10 days) and the very first Chancellor, Otto von Bismarck himself (who almost made it to 23 years). Forbes regularly listed her among the most powerful women in the world since 2006.

She is a Doctor of Physics (her Thesis was about quantum chemistry) who moved into East German politics around the time of the fall of the Berlin Wall; she was elected to the first, last, and only democratically-elected Volkskammer (parliament)note literally "Chamber of the People" of East Germany before it dissolved. Her party, the Demokratischer Aufbruchnote lit. "Democratic Awakening" merged with the West German CDU and in the first federal elections after the fall of the Berlin Wall she was immediately elected to parliament with a landslide 48,1% and was unexpectedly made a member of Helmut Kohl's (who called her "Mein Mädchen"note lit. "My Girl") cabinet, essentially putting her political career into high gear. Her getting the job (first as "minister for women" note  often mistaken as "minister for families", the two ministries usually being the same but not during here tenure then in Kohl's last term as minister for the environment) is often said to be a case of her being the only qualified woman from East Germany available and Kohl needing more East Germans and more women. However, she quickly showed that she was more than anybody's "quota girl" in political astuteness, as her erstwhile mentor would soon learn to his ruin.

When Kohl lost the 1998 election (after a total of 16 years in office, longer than any non-royal since Otto von Bismarck had led Germany in any capacity), Merkel lost her office and a Red Green coalition took over. The CDU soon became embroiled in a political donations scandal that ended the political career of Kohl, who famously refused to name the donors as he had given them "his word of honor". Merkel astutely outmaneuvered the mostly male and western leadership of the CDU and managed to implicate Wolfgang Schäuble, who had been the "crown prince" of Kohl for roughly a decade, in the scandal. However, in the 2002 election Bavarian Prime Minister and leader of the CSU (a sister party of the CDU that only exists in Bavaria and forms a common caucus with the CDU at the federal level) Edmund Stoiber wanted to be the federal candidate for chancellor of the joint CDU/CSU effort and Merkel famously had a breakfast with him at his house in Wolfratshausen where she backed down and let Stoiber have first dibs at the position. However, Stoiber's campaign didn't go all that well and in addition the Iraq War then brewing was really unpopular among most Germans (which Schröder realized but Stoiber did not) and the red green coalition under Schröder was reelected with a narrow margin making Merkel the natural leader of the opposition and basically nobody in the party willing or able to challenge her.

She led the campaign of the CDU/CSU in 2005 and narrowly won more votes than the SPD, despite losing votes compared to 2002. This led to the formation of the first Grand Coalition on federal level since Kurt Georg Kiesinger formed one all the way back in 1966.

In 2009, the Christian Democrats' traditional allies, the Free Democrats (FDP; free-market liberals) picked up enough seats to allow Merkel to shed the SPD and govern with their preferred partner; however, the FDP were completely wiped out in the 2013 elections, leaving another grand coalition the only workable alternative.

As Chancellor, she is known more for being (or at least trying to be) a steady pair of hands at the helm (there are accusations that she's faltered, but some disagree), as opposed to the flashy media-genius of her predecessor. German Media tend to call her "Teflon-Merkel" (being a reactionist politician, accusations don't tend to stick, it's her ministers that fuck up usually), or "Mutti" (mommy, her party-intern nickname).

In 2013, Americans started hearing her name in the news a lot, since it was revealed the American spy agencies were spying on her cell phone and her Internet searches, along with her heavy involvement in the Greek bailout negotiations. Despite an initially rough start, she managed to forge a very close working-relationship with Barack Obama, who - at the end of his presidency - called her "his closest partner".

During the European Debt Crisis, which affected countries such as Greece, Spain and Italy, she has argued very fiercely for austerity measures to combat the increasing financial instability within the Euro-Zone. With the rise of nationalist parties all across Europe and with the United Kingdom voting to leave the European Union, she has been working to hold the EU together.

Merkel also became the West's chief negotiator with Putin over the Ukraine, together with French President Hollande she helped brokering the Minsk ceasefire agreement. In general, it has often been noted that Germany under Angela Merkel has become more proactive on the European stage, with her often been called the continents de facto leader with all its' implications.

In 2015, she surprised watchers by stating that Germany would accept Syrian refugees who were stranded in Hungary, which was interpreted by many as an invitation for refugees who were not yet in Europe. As of June 2016, Germany has received 1,600,000 refugees; an action that won over many of her former critics, but also weakened her domestic support once it became clear how big of a task the integration of so many refugees would be.

In the 2017 election both Merkel's CDU and coalition partner SPD lost a lot of votes prompting the SPD to announce leaving the coalition (although it would still command a majority of seats in the Bundestag), leading to speculations about the first ever "Jamaica" coalition of FDP, CDU/CSU and Greens on the federal level. The negotiations quickly fell apart with FDP leader Christian Lindner stating the often parodied "Es ist besser nicht zu regieren als falsch zu regieren"note "Rather not govern at all than govern wrongly" leading to another Grand Coalition, the third under chancellor Merkel and the fourth on federal level. By the time she completes this entire term, she will tie Helmut Kohl for the longest serving chancellor.

In 2018, Merkel announced that she would not seek re-election in 2021 and stepped down as leader of the CDU. Her final term was defined by arguably one of her biggest challenges, that of containing the COVID-19 Pandemic. In general, her 2020 pandemic response was widely praised for locking down quickly and implementing a robust testing system that kept cases in check. However, her pandemic response in 2021 was hamstrung by the emergence of more virulent strains and the far-right deliberately disobeying policies like refusing to wear masks or get vaccinated. The SPD won the 2021 federal election and, after forming a "traffic light coalition" (SPD, FDP and Greens), her SPD vice-chancellor Olaf Scholz succeeded her as chancellor on December 8, 2021.

When she's portrayed in German media, the focus mostly lies on her perceived aversion to taking a solid political stance. In media from outside of Germany, her Iron Lady qualities (mostly in regards to The European Union) and her apparent Germanic Efficiency are in the spotlight. Many works position her as the grounded, restrained foil to more flamboyant and outgoing foreign leaders.

Insert Merkel Raute here.note She has a peculiar way of holding her hands in photographs, which you can read about more here