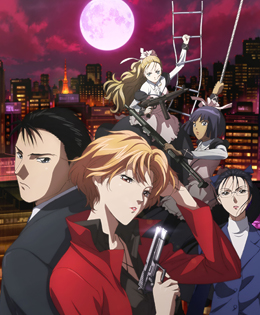 Yakushiji Ryoko is a Superintendent in the Tokyo Metropolitan Police Department, and with her lackey/slave/chew toy Assistant Inspector Junichiro Izumida They Fight Crime!, though more often than not the cases end up involving the paranormal. While being in the Metropolitan Police Department's Criminal Investigation Bureau, Ryoko is the daughter of JACES President Hiroko Yakushiji, who is an ex-MPD high-ranking officer. As such, she is the "official" Yakushiji known in the public to be standing ready to succeed her father. Think Law & Order meets The X-Files meets James Bond and you have a rough idea of what the show's like.

Notable for featuring an adult female protagonist above the age usually considered attractive who is still a badass and incredibly competent while also being extremely sexy.

Created by Doctor Yoshiki Tanaka, the series is a franchise that consists of a drama CD, an anime and manga series that has been concluded with 11 volumes alongside the original novels.

As of 2021, the series has not been "officially" made available to Europe, Oceania and the Middle East. The manga and anime's been released overseas so far to China and Taiwan and perhaps to the various Chinese communities in Southeast Asia. But not the novels as they're still in Japan.

The anime version can be watched in English via Retro Crush.