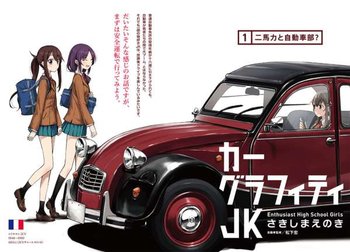 Sena Miki, an honours student, was looking forward to her first day of her new high school life. Unfortunately, she got into an accident on her way to the entrance ceremony, and she ended up missing her first month of school. With no more prospects of entering a school club and her social life shot down due to missing out, she resigned herself to being in the 'go home' club, when a strange girl named Lisa invited her to join a 'club' she just formed: The Car Club.

In spite of her initial hesitation, Miki and her friend Haruka ended up joining Lisa's group. However, they still need to recruit a few more members in order to be recognized as an official club. Thus, the trio start their quest to get their group to be recognized as such.

Car Graffiti JK is a Slice of Life manga by Sakushima Enoki, which was serialized in Monthly Comic Alive from 2015 to 2018.