Anime / The Case of Hana & Alice 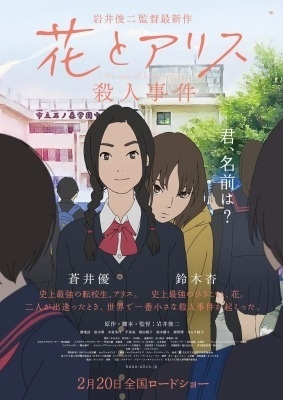 The Case of Hana & Alice (Hana to Arisu Satsujin Jiken) is a 2015 Japanese anime youth drama film written and directed by Shunji Iwai. It is the prequel to Iwai's 2004 live-action film, Hana and Alice.

Tetsuko "Alice" Arisugawa, a transfer student to Ishinomori Middle School, hears a strange rumor that one year ago, "Judas was killed by four other Judas's" in Class 1. While investigating, Alice discovers that the only person who may know the truth, Alice's classmate Hana, lives next door to her in the "Flower House" that everyone is scared of.

Eager to know more about the Judas murder, Alice sneaks into the Flower House to ask the reclusive Hana for more information about the Judas murder and why she's a recluse. The chance meeting of Hana and Alice sets them off on an adventure to solve the mystery of the "smallest murder in the world."

The Case of Hana & Alice provides examples of the following tropes: