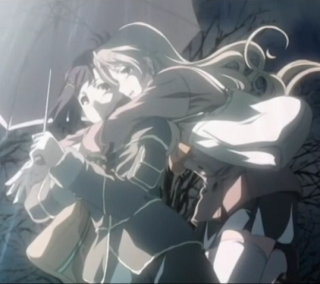 Kanade & Yukino
Kanade Sakurai is in a quasi-romantic relationship with Yukino, her fraternal twin sister. Then, there is Sakuya Kamiyama, an underclassman of the two, who harbors a crush on Kanade herself. Stuff happens to them.
Advertisement:

Candy Boy started off as a gimmick one shot ONA but the notion proved so popular that more episodes have been produced. This caused some confusion with episode numbering: the first episode (the original ONA) is usually not counted, with the technically second one designated as "episode 01", etc. For simplicity's sake, think of the original ONA as "episode 00". Still, there is also a prequel, called "EX 01" — and then there are the various music videos, made from scenes of the original series. Sadly the show couldn't last and ended after the DVD special "EX 02". There is also a two-volume manga adaption, though it's more of an Alternate Continuity.