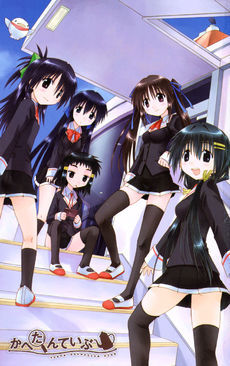 What happens when 5 club leaders are competing to form a club of their own? Enter Emina Tokigawa, who manages to do this by having the remaining four girls become part of hers as well as their talents and hobbies in the Cahe Detective Club.

Cahe Detective Club is a Comedy Slice of Life manga series created by Takeshi Fujishiro (who also made Nagasarete Airantou, making this the sister series) and serialized in Gangan Online from 2009 to 2018 (though physical copies can be purchased in Amazon Japan).

No, it's not a mispronounciation, that's literally the title of the series due to an Ambiguous Disorder from the main heroine Emina Tokigawa, who could not pronounce Cafe for some reason. Hilarity Ensues.

An important note is that Shizuka Hanazono is the cousin of Ayane and Machi Touhouin, who are also the cousins of Ikuto Touhouin in Nagasarete Airantou.

This manga contains the following: