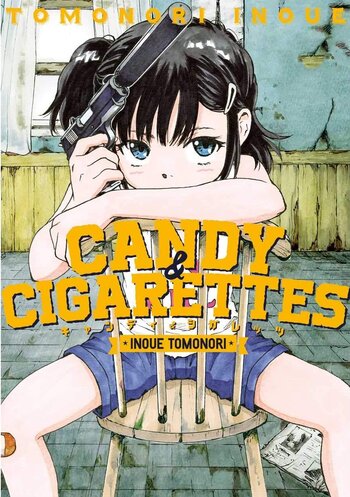 Candy & Cigarettes is a manga by Tomonori Inoue, of Coppelion fame. It ran in Young Magazine the 3rd from 2017 to 2021.
Advertisement:

Hiraga Raizou has just entered retirement from the Japan Metropolitan Police Department (MPD). But hearing his grandson is afflicted with a rare disease costing a million yen a month in treatments, he resolved to raise the necessary money for his grandson's sake. Seeing a job ad seemingly tailored to his skillset brings him to the 'Desperado' used books store, and he is sent for a trial work... as Cleanup Crew for the assassin employed by the organization, the little girl Suzukaze Miharu.