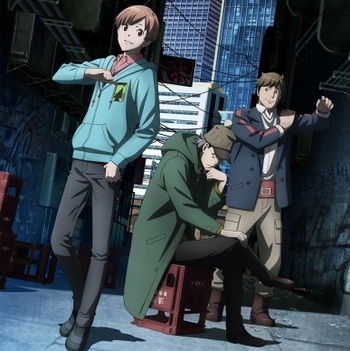 Sherlock Holmes as never seen before.note From left to right: James Moriarty, Sherlock Holmes and John H. Watson.
"Shinjuku West Side. On the other side of the wall from its well-ordered, well-lit streets lies the chaos of the east. In the darkness of Kabukicho, where elephants roar to sound the time and villains lurk in every shadow, you'll find six detectives. Weirdos, freaks, bozos and fools to a man. Who knows what madness they'll bring with them. Please enjoy this battle of wits between detectives."
— Introduction to the show after the 1st episode.
Advertisement:

Case File nº221: Kabukicho (Kabukicho Sherlock in Japan) is an original anime production directed by Ai Yoshimura and created by Taku Kishimoto with character designs by Toshiyuki Yahagi and music by Takuro Iga.

The show is animated by Production I.G and airs currently on MBS, TBS and BS-TBS in Japan when the first episode aired on October 11, 2019 under the Animeism program block. The anime will also have a manga and novel adaptation, the former starting by January 4, 2020. An OVA was released on August 26, 2020 and covers the past and future of the main cast.

Outside of Japan, Funimation has licensed it for streaming the original Japanese version with English subtitles and an English dub track in North America, Britain and Ireland while AnimeLab streams it in Australia and New Zealand. For Russia and Russian-speaking countries/territories, it is done by Wakanim. Dynit handles the show for Italy and Italian-speaking countries/territories and the show is exclusively aired in those places via Amazon Prime.

The show primarily takes place in Shinjuku, in the red light district of Kabukichō, which has been walled off somehow in the middle. On the advice of a yakuza oyabun named Kaneko, John Watson heads to Kabukichō in order to seek out a detective named Sherlock Holmes. Holmes happened to be The Quiet One who doesn't say much. But he happens to be a very intelligent person who's able to hunt for clues and information by studying the evidence at crime scenes and deduce his theories... most in the form of rakugo.note Rakugo is a traditional Japanese art of storytelling, developed as a form of entertainment for ordinary citizens during the Edo Period (1603–1868). At first, many different kinds of entertainers would perform the generally humorous monologues, but gradually specialists emerged. These are now known as rakugoka. Dressed in a kimono, the storyteller remains seated throughout the performance, playing the parts of several characters and acting out different scenes with only a fan and a hand towel as props. Unable to fall back on costumes and scenery, it is the job of the rakugoka to inspire the imagination of the audience through the skill employed in portraying the world of the story. The punch line is known as the ochi (literally, the “drop”) and a good delivery is essential to a successful performance.

Holmes and Watson started to work together when they investigate a murder case alongside some private and actual detectives of the Tokyo Metropolitan Police Department dubbed Jack The Ripper. From there, they tackle on cases that occur in Kabukichō and the surrounding areas. That's if... they can work together despite the other detectives trying to upstage him in cracking a case for the money.

John Watson has a few words about the state of Kabukicho once he crosses through the underground passage between the West and East side of Shinjuku.

John Watson has a few words about the state of Kabukicho once he crosses through the underground passage between the West and East side of Shinjuku.