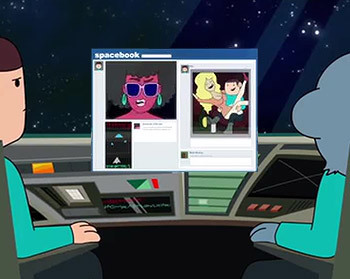 Technology, communication, and the spread of information that goes with have all improved dramatically over the years. At first, long distance communication was very limited, specially through written messages. Then things like the telegram and Morse Code. Then came radio and television. Currently penultimately came the internet and e-mail.

Finally, we have a Social Network, a site where people can interact with each other immediately through a phone or computer. This can result in clubs, sharing of photos and artwork, or new good/bad relationships that would've never been made otherwise.

Generally a Bland-Name Product of Facebook, Twitter, or possibly MySpace if the creator is trying to go off the beaten path a bit. Sometimes it's limited, such as a network only for the faculty and students of a particular school. This permits the storytellers more freedom when, for instance, a suspect pool can be only a few hundred users rather than a few million, or when the protagonist finds himself the guy in charge of the whole thing.

May be used to impart a Social Media Is Bad aesop. Compare The Alternet, Shallow News Site Satire.