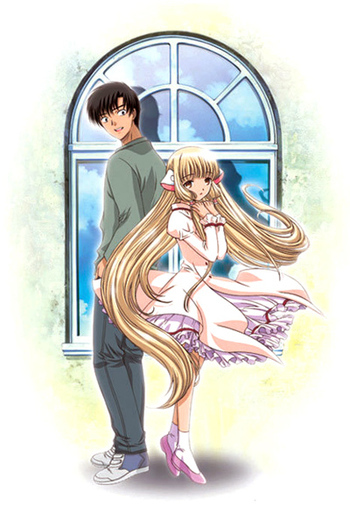 Hideki Motosuwa would love nothing more than to escape the country. With only a scarce amount of money and clothes, Hideki leaves his home and arrives in Tokyo. When he gets there, he notices a few people with horn shaped ears. These people aren't actually humans but Persocoms, androids with a wide array of features from storing personal data to internet surfing and so much more. Though Hideki would like to have a Persocom of his own, even the cheapest droids are way out of his price range.

Shortly after settling into his new apartment, Hideki's luck turns around when he stumbles upon a discarded Persocom in the shape of beautiful young woman. He takes her and manages to boot her up, but quickly finds out that there was a reason she was tossed: the only thing she can say is "chi", leading Hideki to name her Chi. Further investigation shows that despite being able to move, speak and learn, Chi's operating system is basically nonexistent. In fact, her model isn't anywhere on the market, suggesting that she was custom-built. Most alarmingly, any attempts made to connect Chi to another Persocom ends up frying the other Persocom's system. One of the Persocom experts Hideki takes Chi to suggests she might be one of the legendary Chobits, a series of Persocoms rumored to have free will and emotions.

Regardless of whether or not that's true, Hideki essentially adopts Chi, taking it upon himself to teach her everything she needs to know in order to function. This decision may prove to be too much for the country boy when Chi shows signs of falling for him and Hideki realizes that he may be falling for the artificial being in turn. And while he struggles to understand his feelings and all the implications therein, Chi's mysterious past catches up with the both of them...

Chobits (ちょびっツ, Chobittsu) is a science fiction seinen manga by CLAMP. It was serialized in Weekly Young Magazine from 2000 to 2002, and compiled into eight volumes. Since the series' initial acquisition by Tokyopop, the license for the English translation has changed hands a few times. As of 2020, Kodansha released a 20th anniversary version of the series which complies the manga into a four volume omnibus set.

A 26 episode anime adaptation aired during the Spring 2002 season. Production was handled by Madhouse. The North American release was handled by Geneon.