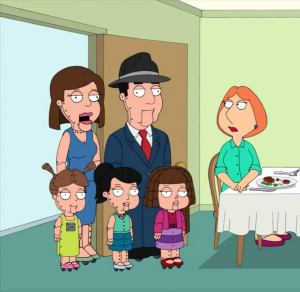 "I constructed two advanced A.I. robots. You would call them Models DLN-001 and DLN-002. But I call them my children. I may have built them by hand, typed their coding myself, but as my children... they have enriched my life and helped me grow as a person. They've brought me the same fears and joys of any parent. No faceless, nameless, lifeless tool can do that!"
— Dr. Thomas Light, Mega Man (Archie Comics)
Advertisement:

Although mechanical beings are not 'related' in any true biological sense, the concept of robots being 'family' is nevertheless a common trope in sci-fi. After all, if robots can get married, be ridiculously human, and be loyal friends, it makes perfect sense that robots would develop their own sense of family.

How seriously this term is applied usually depends on how human-like they are, how well characters regard robots, and how light the source material is. Sometimes the robots love each other just as much as any human family. Other times it's just a technical term used by humans.

The main types of family are as follows:

This trope is the most 'family friendly' kind of relationship that can happen between creators and fellow robots. Other kinds would be their creators being gods, an empty technical term because the robots are barely sentient, or the robot considers itself above such petty 'relations'.

Also compare Robotic Spouse for when a human has a romantic attachment to a robot, which can lead to a robot family when they adopt/make children. All of these types of robot family can include a Robot Kid, often playing the role of "son" or "daughter".