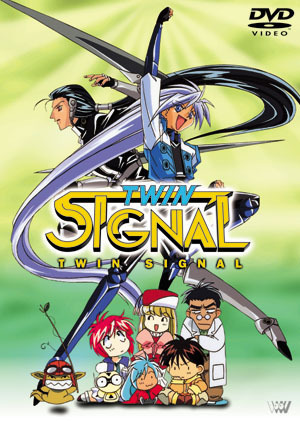 It was later animated as a 3-episode OVA produced by Aniplex, Square Enix, TV Tokyo note  TV Tokyo produced quite a few OVA's despite not airing them for obvious reasons and animated by Tokyo Kids. Both the manga and the anime were licensed in North America by Media Blasters.

Dr. Otoi, the world's most eminent robot scientist, has just finished work on Signal, his most incredible creation yet. Made from MIRA, an almost supernaturally strong substance with regenerative properties, Signal will be both incredibly strong and incredibly lifelike. As a gift to his grandson, Nobu, Dr. Otoi asks him what sort of personality to give his new robot. Without hesitation, Nobu answers: "Like a big brother!" Which would all go quite well if Nobu didn't sneeze during the programming.

Now Signal is the pinnacle of combat robot technology, with a huge glitch: Every time Nobu sneezes, he transforms in a hyperactive Fun Sized "Chibi Signal" with an adoration for chocolate. In some ways, though, it's preferable to the full-sized Signal, who is what is technically known as an "arrogant airhead". He's in good company, though, as his family includes the Brilliant, but Lazy (beautiful) robot scientist Chris, Dr. Otoi's notoriously spacey son, and a host of adorable but inexplicable mini-robot creations.

Of course, with great technology comes those who want to steal said technology, and Dr. Otoi's old rival and colleage, Umenokoji, is after the MIRA Signal's made up of. He plans to kidnap Signal by first kidnapping Pulse, Signal's older brother/prototype, who would technically be inferior if his creator, Dr. Otoi's son, hadn't just decided to randomly upgrade Pulse with some new super-weaponry. Thus kicks off a series of wacky hijinks involving robot battles, super-science, robot battles, unlucky policemen, robot battles, kidnapping plots, robot battles, and did we forget anything? Oh yeah. Robot battles.