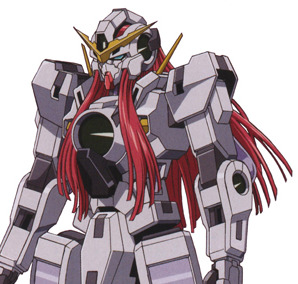 You should see how she brushes that thing.
"I gave you hair! (ROBOTIC HAAAAIR)"
— The Megas, "The message from Dr Light"
Advertisement:

Robots are curious beings. They may vary in lifestyle, behavior, design, intelligence... even gender. Indeed, they come in a myriad of ways. But a particularly curious thing about them, humanoid ones in particular, is that no matter where they come from, no matter how they appear, they may have some form of a trait found most commonly on mammals. By which we mean... hair.

The hair in question could be a wig made to resemble normal human hair (or at least attempt to) or it could just be a series of mechanical parts (functional or not) which resemble a hairstyle. Either way, (as with Alien Hair and Non-Mammalian Hair), the main purpose of this trope is to show the audience a humanlike robot either by making it seem more human (since hair on the head is a very specifically human trait, especially for entities that are meant to appear female), or by emphasising a more human-like robot's mechanical nature (by making the "hair" look stiff and unnatural or having an Implausible Hair Color). A variation of the latter often appears in theatre and low budget live-action movies with android characters; the actor's hair is fixed with hairspray and a combination of careful trimming and makeup is applied around the hairline (so there's a clear line) to make it look synthetic.

Only list animal examples which clearly have parts designed to resemble a particular feature, like a mane. Cyborgs also count, but only list examples with hair that is actually synthetic (rather than their original hair). Robots and cyborgs who are indistinguishable from normal humans shouldn't be listed unless their hair fits the "makes them look artificial" variation. Humongous Mecha which have styles resembling their pilots' also merit a mention.

A common feature of any Fembot (for which it can serve as Tertiary Sexual Characteristics) and more or less mandatory for a Robot Girl, although masculine robots are not exempt. A Robot Me will have this trope by necessity (unless it's a copy of someone bald, of course). Naturally, other Hair Tropes can be applied to the "hair".