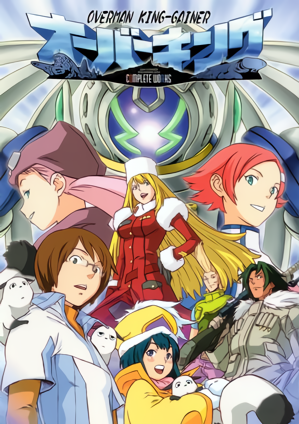 A 2002 anime series produced by Sunrise Studio, created by the legendary director of Mobile Suit Gundam Yoshiyuki Tomino and with mecha designs by Akira Yasuda, better known as legendary Capcom illustrator Akiman. The characters were designed by Kenichi Yoshida and the head writer was Ichiro Okouchi. This series can be considered a return to the directorial approach seen in 1982 Xabungle, where comedy is much more emphasized than his normal dramas (Translation: Don't worry, Tomino doesn't kill everyone...or anyone, for that matter.)

After an environmental cataclysm, the humans went off to live in giant dome cities called Domeopoli to give the Earth time to recover. The domes are governed by London IMA, and are supplied by private firms like the Siberian Railroad company. Although the domes are nice-enough places to live, people want to return to the homes of their ancestors - they believe the earth has healed enough to support habitation once more, and thus set out on massive pilgrimages known as Exodus. London IMA and the private firms attempt to stop them, refusing to lose their massive customer base.

A large population of one dome wants to go to Yapan, and so, in preparation, hire Exodus specialist Gain Bijou. As part of his plan, Gain gets captured, meeting expert gamer "King Gainer" Sanga (the latter being arrested during class due to the two having similar names). Together they escape prison and find the Overman that Gainer names after his gamer title. They also kidnap Ana Medaiyu, the daughter of the dome's leader, Duke Medaiyu. Ana turns out to be a willing hostage, going with them to see the outside world along with her tutor Lioubov Smettana. As whole parts of the dome's city are pulled by huge Silhouette Mammoths, Gainer finds out that his friend Sara and teacher Mamado are a part of the Exodus, and he must protect them as they go to Yapan. Sent to stop the Exodus are the members of Siberian Railroad (first lead by lovers Yassaba Jin and Adette Kistler) and later London IMA's Saint Reagan, represented by Asuham Boone. While the Siberian goons are simply doing their jobs, Asuham has a personal grudge against Gain, who left his sister heartbroken years before.

The series is also noteworthy for being made after Tomino recovered from his infamous Creator Breakdown, the result being a lighthearted series that has remarkably little death (only around a dozen people die, most of them villains) compared to his previous "Everybody Dies" Ending forays.

Has nothing to do with that other sort of Overman.