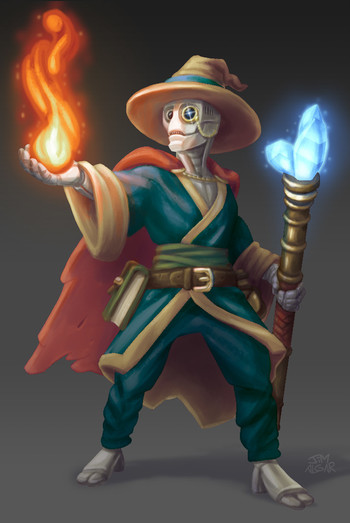 As it is known, robots are creations of science. So when you got a robot who can cast magic, which is usually at odds with science (even if they can go hand-in-hand), it becomes a pretty novel sight and comes up with plenty of strange implications.

A lot of magic in fiction requires the caster to have some metaphysical connection with magic—usually a soul—in order to use it. A robot capable of using magic, therefore, has enough of a Heart Drive to meet this requirement, according to some works.

For this to count, Clarke's Third Law should not be in effect (i.e. the magic shouldn't be some very highly advanced technology), and the character has to be explicitly robotic from inception (ergo cyborgs don't qualify for this trope: they count as Cyborg Wizards instead). Since Tropes Are Flexible, if an Artificial Intelligence somehow has supernatural powers, they count for this trope too since it's that intelligence rather than the artificial body that makes a robot what/who they are.

Sub-Trope of Magitek, which is not limited to robots, and Science Fantasy. Also a case of Ninja Pirate Zombie Robot, being a combination of two things we consider cool, and Oxymoronic Being and/or Paradox Person, due to technology and magic mixed together.

Sister Trope to Wizards from Outer Space and Cyborg Wizard.