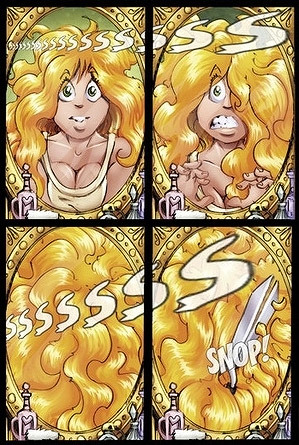 Hair normally takes a while to grow out. Using hair growth products may help some, but in fiction, the only limit to how fast hair can grow is how realistic the show wants to be.

Subtrope of Artistic License – Biology. Inversion of Hair Today, Gone Tomorrow. Expect Status Quo Is God if this doesn't stick. See Hair Reboot when the hair returns to its original form instantly, or Stubborn Hair for when regrowth occurs immediately after attempting to cut off an offending hairstyle. Power Makes Your Hair Grow is a type 2 subtrope (see below). Spontaneous Mustache is the subtrope for facial hair specifically. A possible property of Magic Hair. If the hair growth is greater than you want, that's one reason to Never Trust a Hair Tonic. Often occurs in Gender Bender situations because Long Hair Is Feminine.