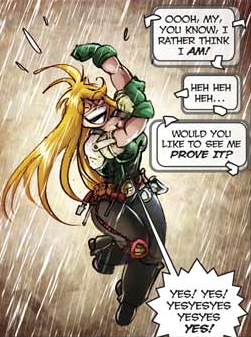 When a Big "YES!" is not big enough for excitement.

Suppose Alice is watching the lottery show while looking at her ticket from time to time. When the numbers she wrote come down at the random or with the exact entries, Alice screeches in elation and bouncing off the couch going "Yesyesyesyesyesyesyesyesyesyesyesyesyesyes...!", while Bob is just right next to her, either joyed or alarmed. Congratulations! Alice just gave out this trope.

Often, but not always muttered out by, a Motor Mouth. Or overexcited children getting their presents. Or in a wedding proposal. Or having sex.