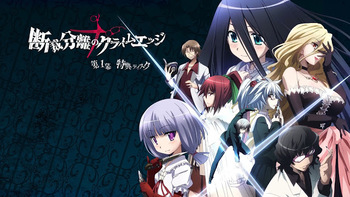 Kiri Haimura has an unusual fascination with cutting other people's hair. One day, he encounters a girl in a western-style mansion with incredibly long hair named Iwai Mushanokouji. Kiri is overjoyed over this fact and tries to cut her hair, only to find out that it can't be cut due to an inherited curse and it grows at a ridiculously fast rate. It also turns out that Mushanokouji is being hunted by descendants of murderers who are trying to kill her (using cursed weapons passed down by their ancestors called "Killing Goods") so that they can get their wish granted. A little while later, Kiri learned from his grandfather that he had an ancestor who liked to dismember and cut up people with scissors called "The Severing Crime Edge," which Kiri had inherited. Now, Kiri has to protect Iwai from serial killers with these scissors.

The Severing Crime Edge (断裁分離のクライムエッジ Transliterated Dansai Bunri no Crime Edge) is a seinen action manga that debuted in 2009, written by Tatsuhiko Hikagi and published by Monthly Comic Alive. The manga concluded in 2015 with 11 volumes. An anime adaptation by Studio Gokumi aired as part of the Spring 2013 Anime season lineup.

The anime was simulcast on Crunchyroll

and is also on The Anime Network

Tropes found in this series