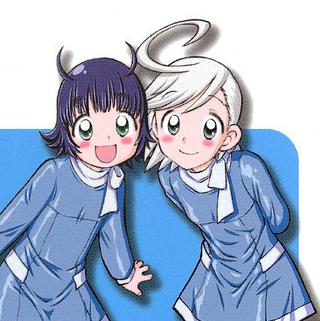 Go ahead, guess which is which.
Advertisement:

Fudou Shiharu is an ordinary middle school student. She's clumsy, hates gym class, is not, shall we say, academically gifted, and is generally just a nice girl. Oh, and she's also the reincarnation of Lucifer and an accidental low level reality warper, while her best friend, Jinguu Emika, is the reincarnation of an angel ( specifically, the Archangel Michael) who has the power to turn back time.

One day they get a new homeroom teacher, Marcho Sius, who calls Shiharu in after class, refers to her as "Lucifer-sama", and explains to her that the 72 generals of Hell, disguised as humans, have been scouring the Earth for her while plotting the resumption of their war against Heaven. Then Emika casually overpowers him and runs time back a few minutes so only she and Marchosius remember that the conversation ever happened.

Why is Emika protecting the reincarnation of The Lord of Lies? Why doesn't Shiharu remember who she is? And why do so many of her classmates seem to know all about her?