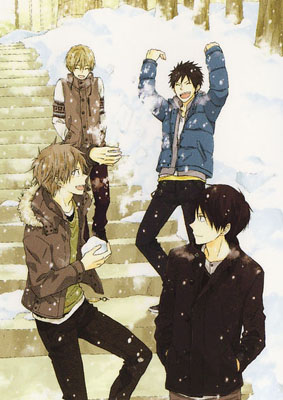 Clockwise from bottom-left: Rensuke Isezaki, Souta Nogami, Naotaka Uemura, Yui Kurata.
"If you want to reach a new tomorrow, you have to move towards it, right?"
—Rensuke Isezaki
Advertisement:

When you're spending your days idly, you often don't realize how fast the end is approaching, and when it does come, you have to wonder—did you do everything you should have, and how will things be from now on?

At least, that's what Isezaki, Kurata, Uemura, and Nogami have to wonder.

By Sorata Akizuki, the creator of Snow White with the Red Hair, Seishun Kouryakuhon (literally "Youth Strategy Book") is a short Slice of Life manga that ran from 2009 to 2010 in the shoujo magazine LaLa. Anyone who's graduated from high school will likely relate to this one. Following the adventures of four friends at the all-boys school, Kamiyama High, it deals with the boys' struggles with crushes, exams, their friendship, and ultimately, their impending graduation and separation.