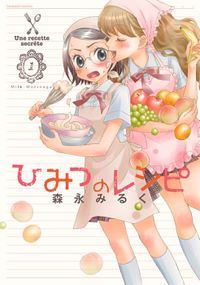 That sweet taste of yuri

Horikawa Yuuko, newly appointed president of her school's cooking club, but referred to by both Wakatsuki and the narrator as President, is rather thrown when the club's newest recruit, Wakatsuki, comes to her with a request: a kiss. Wakatsuki suspects she might be gay and wishes to test the theory, and since she only joined the cooking club to attract a good husband, she plans to quit the club if her theory proves correct. Desperate to keep the club numbers up, since Wakatsuki is the only first year to join, Horikawa agrees to the odd request, and much wacky Les Yay ensues.

The Secret Recipe is a Girls' Love manga by Morinaga Milk that began as a one-shot but has since expanded into a serial.

The Secret Recipe contains examples of: