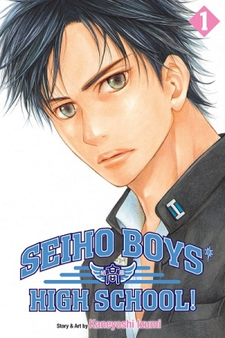 Seiho Boys' High School is a shoujo manga that ran from 2006 to 2010 in Betsucomi. As the title suggests, it is set in an all boys school. The main characters are Maki, an everyman with a sad past, Nogami, a Four Eyes, Zero Soul character with a rude mouth, Kamiki, the hottest guy in school, and Hanai, a 'certified girly boy'. It's a romantic comedy focusing on their efforts to land girlfriends despite living in a One-Gender School out in the country.