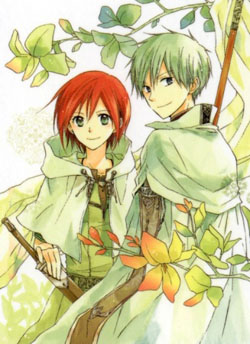 "Color has meaning, and red is supposed to represent fate. You may not like it much now, but your red might lead to something good when you least expect it."
—Zen Wistalia to Shirayuki ("Encounter...Changing the Color of Fate")
Advertisement:

Snow White with the Red Hair (Japanese: Akagami no Shirayukihime) by Sorata Akizuki is an ongoing Shoujo fantasy romance manga loosely based on the fairytale Snow White. It began serialization in LaLa in 2006.

In the kingdom of Tanbarun lives a young herbalist with rare apple-red hair named Shirayuki. Her unique beauty catches the attention of the crown prince, Raj, who orders her to become his concubine. She instead chooses to flee Tanbarun, cutting her hair and leaving it as a parting gift for the prince. She escapes to the neighbouring kingdom of Clarines, where she quickly befriends another, much nicer prince, Zen. The two quickly become friends, and Shirayuki vows to become an herbalist in Clarines' court so she can stay by his side.

An anime adaptation by Studio BONES premiered in July 2015, with a second season following in January 2016.

Viz Media has licensed the manga for English release, with the first translated volume published in May 2019.