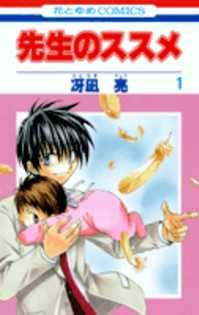 Sensei no Susume is a three-volume manga created by Ryou Saenagi, beginning in 2005.

God has been dead for some time, and the angels in heaven have decided it's time to find a replacement. The four chosen candidates have one year to prove their suitability for the position, while also having a mission to fulfill.

Each of them is given a being in the form of a 'baby'. It has no emotions, thoughts, or memories of its own, and the angels must raise their 'baby' into a being 'as close to human as possible' within the time given. They are allowed to reveal their true identity to one human being on Earth.

Rain is one of the candidates for the position, though a rather reluctant one. He tests Shirou Natsume, a highschool student that dreams of becoming a teacher one day, and finds him a good choice to reveal himself to. Now Shirou must raise this 'baby' with Rain.